Construction of Nottingham’s most ambitious and exciting new residential and community development is set to start at Trent Basin, after contracts were signed by Blueprint, Nottingham City Council and building contractors Willmott Dixon.

When complete Trent Basin will comprise around 350 low-energy apartments and family homes designed around traffic-calmed roads and community spaces. The site’s waterside character will be reflected by tall canal-style houses and the regeneration of features such as a large basin inlet formerly used for the unloading of cargo by Trent barges. 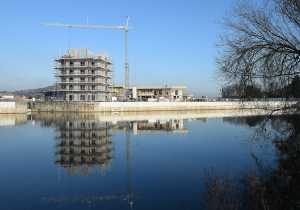 Work on the £90m waterside scheme, located on the north bank of the River Trent opposite the Lady Bay nature reserve, is starting now with the first phase of 45 low-energy family homes. These will be ready to buy in spring 2016.

Subsequent phases over the next three years will fully develop the site, which lies within the Nottingham Waterside regeneration zone, into a stylish and sustainable new community located midway between the city centre and the open spaces of Colwick Country Park.
​
Development of Trent Basin is seen as key to unlocking the larger regeneration of the entire Nottingham Waterside zone, a complex landholding which has defied the development efforts of various agencies over the last 20 years.

“We aim to develop Trent Basin as a model of 21st century sustainable living where the guiding principles will be people, place and planet,” said Blueprint chief executive Nick Ebbs. “This will be a new kind of community which will be part urban and part suburban; compact but not dense; a well-designed, neighbourly community not dominated by cars, where people can benefit from both city living and the nearby countryside.”

Nottingham City Council leader Councillor Jon Collins said: “We have long-held ambitions to see this site and the wider Waterside Zone developed for residential use, so I’m glad to see it has started to get underway. It has proved difficult to persuade developers that our vision to transform this unloved industrial area into a highly sought-after community is the right one, which is why we have made some bold moves to get where we are today,

“There are few sites in the city which give us the opportunity to create a high-quality new development like this, which will help to bring jobs to the city not only during construction, but also by making Nottingham a more appealing proposition for new businesses.”

Simon Leadbeater, managing director for Willmott Dixon’s residential construction business in the Midlands, said: “We are delighted to be working with Blueprint on Trent Basin, which strengthens our presence on other regeneration schemes in Nottingham. We have a strong track-record for building low carbon, energy efficient homes, which includes creating the largest residential development to meet Passivhaus standards and England’s first zero carbon village. It also plays to our strengths of working on sites in urban locations and we will be bringing this collective expertise to Trent Basin to deliver exceptional homes. ”

The architect at Trent Basin is Nottingham firm Marsh Grochowski, which has previously worked with Blueprint on its successful low-energy housing schemes at Green Street and Hobart &amp; Pitcairn in The Meadows. For Trent Basin, Marsh Grochowski has also worked closely with Manchester-based URBED, which earned the Urban Design Group Practice Award 2015 for its masterplanning of the site and the wider Nottingham Waterside area.

Directions: Trent Basin can be accessed via Trent Lane, off Daleside Road NG2. Parking is available in Trent Lane.