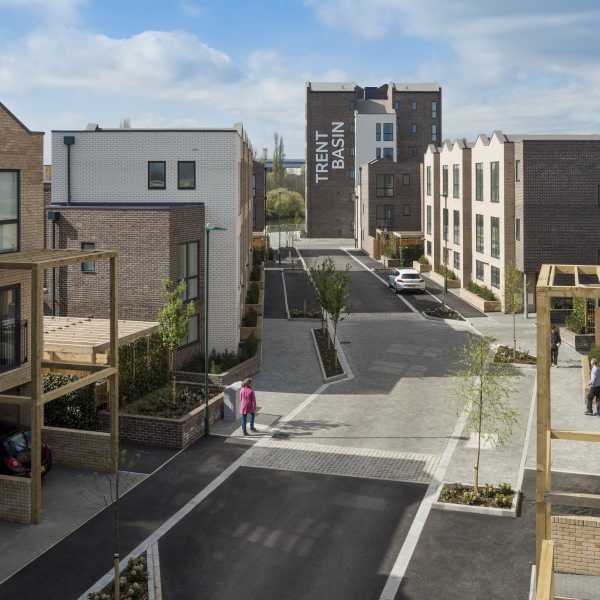 Nottingham sets the SCENe for energy use of the future

Following a visit from the Climate Change Minister, Claire Perry, Nottingham has yet again been put on the map for its forward-thinking and creative approach to energy use – particularly for the work being carried out at our current development on the banks of the River Trent.

The Minister came to Nottingham on a visit which coincided with the government’s announcement of its Smart Systems policy – its plan to deliver a more flexible energy system which removes barriers to smart technologies – and met with researchers at the University of Nottingham to hear about their pioneering work to create smart systems technologies which will change the way the UK stores, manages and consumes energy.

One of Nottingham’s projects which Minister Perry was most interested to hear more about was our community energy scheme at Trent Basin – Project SCENe, which will be home to Europe’s largest community battery (2MWh) and to solar photovoltaics which will generate, store and distribute energy at a neighbourhood level, while also launching a unique energy company for residents.

A trailblazing consortium of business, government and academia has come together, supported by Innovate UK and ERA (Energy Research Accelerator), to pilot the state-of-the-art technologies and unique business models involved in the project at Trent Basin, which will demonstrate how to lower cost and reduce carbon whilst allowing residents to better engage with the energy they consume.

Minister Perry was keen to hear more about how homeowners at Trent Basin will be invited to participate in Project SCENe and, by opting in, will look to make significant savings in energy costs, as it is a tangible example of the government’s vision for changing the way the UK stores and uses its energy in its overarching goal to tackle climate change.

Project SCENe (Sustainable Community Energy Networks) at Trent Basin has been in planning for just 3 years. It is being supported by £8m of grant funding from Innovate UK and The Energy Research Accelerator (ERA). A formidable consortium of partners has come together to deliver the scheme, including Blueprint, The University of Nottingham, AT Kearney, Smartklub, Siemens, URBED, Slam Jam, Stickyworld, Loughborough University, Solar Ready and supported by Nottingham City Council.

At Blueprint, we are always in support of initiatives, however big or small, which are working to tackle the energy crisis our planet now faces. We’re committed to ‘doing our bit’ in transforming how homes and businesses store and use energy as part of our various developments, but particularly at Trent Basin, so we were certainly encouraged by the government’s latest report and policy announcement which outlines how the UK energy system is changing in line with our principles. You can read more about the government’s plan here: http://bit.ly/2upgcRN

« Battery Powered Britain: How Community Energy is Sparking Debate in the National News
Encouraging data about the buoyancy of the East Midlands housing market »